In Iyengar Yoga we follow strict guidelines to ensure longevity of female health, no self harm and we work with natures flow.

Our teachers are educated on the care of your practice whilst menstruating.  It is encouraged you turn up to class and practice the supportive variations that allow you to work with your particular cycle and any issue that may arise for you as an individual. This is a time to honour your female body.

Why shouldn’t we do inversions (viparita sthitti) during the period?

During menstruation if one does inversions the blood flow will be arrested. Those who tried to do out of enthusiasm or callousness will have noticed that the flow stops abruptly. This is certainly not good for health since it may lead to fibroids, cysts, endometriosis and cancer, damaging the system.

According to ayurveda, what ever has to be thrown out should be thrown out and not retained or held in. You cannot hold urine, feces, phlegm, mucus etc, inside as they are substances that have to be thrown out. These are called as mala – the waste, which need to be excreted. If they are retained within they invite all diseases.

During menstruation one has to lessen physical exertion including walking, dancing or heavy house-hold work. The body demands rest and relaxation and one needs to provide that.

The inversions have their own characteristics. This category of asana arrest the menstrual flow and when done during pregnancy they hold the foetus safely and healthily. For those who have frequent miscarriage these asanas prove to be a boon. Those who prolong their periods for more than fifteen days, it is permissible for them to begin to do the inversions after twelve days though they have continuous flow. The inversions will arrest the bleeding. Obviously one has to know the cause behind such prolonged and heavy flows and treat that disease with other asanas during the days of non-period. Yet, that the flow can be checked is a fact. If a woman gets periods during ovulation, the inversions are administered like medicine.

After the menstrual cycle gets over begin the practice of asanas with inversions, as they are great healers as far as the reproductive system is concerned. They quickly bring a hormonal balance.If this background, as far as the effects of inversions are concerned are known, one need not doubt about their omission during the periods. Still, due to obstinacy and rigidity, if one forces oneself to do one may have to pay heavily later if not immediately.

If you have any queries, or would like to discus a home practice please see you Teacher.

Chevron Yoga offers a blend of Iyengar experience and wisdom. We are a shop-based studio that sells props and retreats that are complimented by our classes. Established for over 9 years, we are located in the bustling West Burleigh precinct.

All privates include travel from Surfers Paradise… 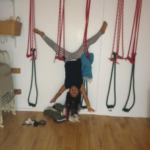 This is such as great article by Iyengar…